Wolf at the Door (spoiler)

I've just finished reading this Space wolves short story included in the Tales of Heresy book. I really like it but I had a deja vu feeling while I was reading it and now I know what it is. It is really similar to one of my favorites movies: The 13th warrior 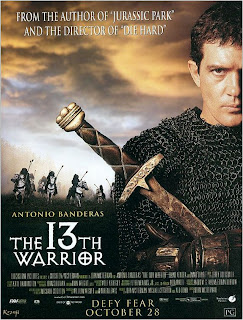 If you think about it, everything makes sense:

Don't get me wrong I love this story, specially the final surprise and knowing where it comes from it only gets better (damn now I really want to watch the movie again!).

Hmmmm this blog has something to celebrate, i think :D 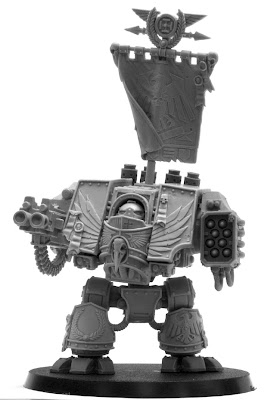 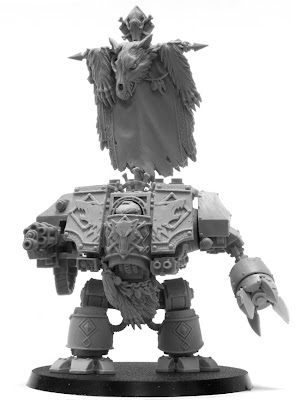 I think this two aren´t the best forgeworld dreads, although i like ´em.
To take a look at the Dreads and the Mek FW will be releasing soon click HERE.
I only hope some more raven guard releases from forgeworld.
And one more time (last time, i think) ... don´t mind the tags :D
Posted by Grajo at 6:37:00 PM 3 comments: 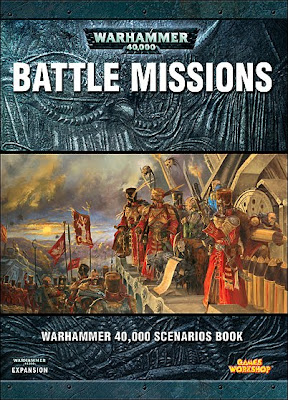 Some time ago, i was reading the astronomican in GW´s web page, when I read that they are going to release some new kits for Orks, IG and Space Marines.

I was talking about it with my fellow blogger, Elahir, he said that everything in the marines codex was released as miniature, and i´ve been thinking and got a pair of ideas about it:

Master of the forge: We can convert our techmarines to fit the role of a Master of the Forge, but there is not any kit at the moment, and it will be cool.

Plastic Venerable Dreadnought: I think we need a plastic and more customizable Ven Dread, the one is a very heavy chunk of metal (despite I like it), and isn´t customizable at all, so every GW Ven Dreadnought is kinda the same but with different colours.

New Dreadnought kit: The old one is good, but the close combat weapon seems ridiculous near the Ironclad one, if you put one near another the regular dread seems like a huge guy with tiny arms, and again... a little customization will not hurt.

Dreadnought drop pod: If they release a new dread (regular or venerable) it will be an ill spend opportunitty if they don´t release one of this.

Terminator captain/commander/chapter master: Hey, Chaos Space Marines got one of these, so I´m praying our god emperor to get a kit for space marines, especially when I´m thinking about buying a CSM one and file it until it fits as a space marine commander (i really like the lightning claws and they really fit in my Raven Guard army).

Thunderhawk gunship plastic kit: Elahir is praying for one of these, not me, I´m not a great fan of these (despite the Raven Guard is supposed to be the chapter that owns more thunderhawk gunships).

In the last post i was talking about my raven guard home custom made scheme, and today is the terminators´scheme turn.

This was the first scheme I tried for my termies (which my shooty termies still bear): 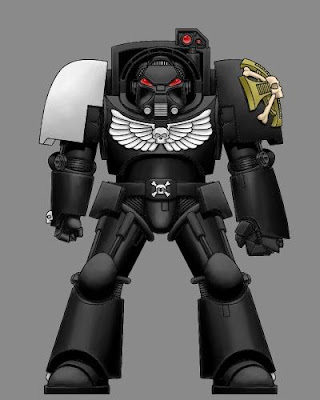 And this is how I am painting them at the moment, (which is exactly the same but with a white or red stripe in the helmet). 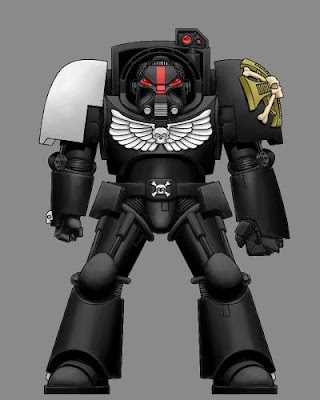 And a white stripe for the assaulty ones: 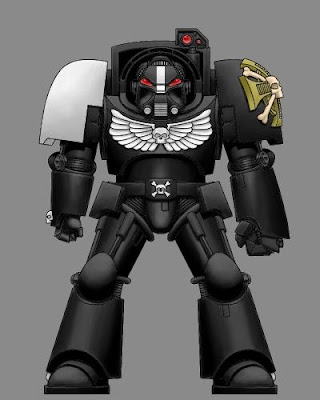 And this is an example of my assault termies (stil WIP), they are 5 out of 10 (right now i have painted 2 more and a subtle converted lysander, but i have no photos yet. 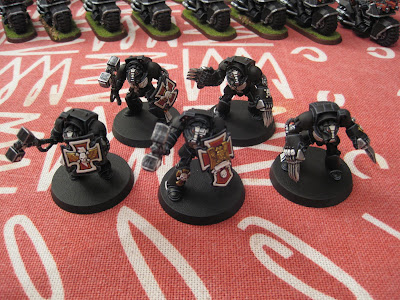 Don´t know why but I am really proud of them.

If someone knows how to add photos thar resizes when clicked on, please let me know :D

A bit of story: Schemes.

And now a bit of story:

About two and a half years ago, when we agreed to get back to play warhammer 40k again, I was thinking about 2 army options: tau and eldar. I have an inherited eldar army (from an old friend that i haven´t seen in about 10 years), but i really like the multi-species do-gooder style of the Tau (and tau are pretty easier to paint than the eldars, which for a guy that has been out of miniature painting for years is a thing to consider).

After much internal debate I decided to go with the tau, so i started my tau army.
The colours wasn´t the best choice, but i really like ´em, they were black, turquoise and orange for details (I know what you are thinking and no, it doesn´t stink, in fact they looked great), and when about 1500 points were painted the shelf where I had the minis broke down and my army was tore into pieces, tiny pieces... indeed very tiny pieces, don´t know how, but... microscopic pieces.

I know it was an accident, but i was really upset not for the money I lost in about 3 seconds but for the effort I put on these miniatures (well, for the money too :) ), so i decided to start another army that need few models to play with, and I went with my beloved and sometimes hated Space Marines (so I´m now a marine player like about 110% of 40K players i think).

And again i started with the whole scheme-thinking process, first of all I was going to paint them white with red details, but I accepted the limit of my skills (white paint is my nemesis) and keep searching.

Other option (one I really liked) was a grey, yellow and white scheme (which finally i´ll use to my eldar, you´ll see).

At this point I decided to select the army for the fluff so White Scars, Salamanders and Raven Guard do it to the final selection.

Well, I like Salamanders fluff, but if you remember I´m a fan of fast-mobile armies, so Scars or Ravens were the logical choices, and when I thought of my skill painting white and the priming-highlighting fastness of the Raven Guard my final choice was already done.

Then I started to gather information of the Raven Guard and the schemes for the minis, and i discovered that even GW don´t has a main scheme developed for them (if you take a look at the scout in the codex and the scouts in the land speeder storm box you´ll se they are painted in a totally different scheme).

I like the Jet Black scheme, but I thought it was going to be a too black army, without any fun in painting it and nothing remarkable so I twisted the scheme a bit and mixed the main scheme with the scheme of the veterans (white shoulderpads) and red for the casing of the weapons and this is what I get: 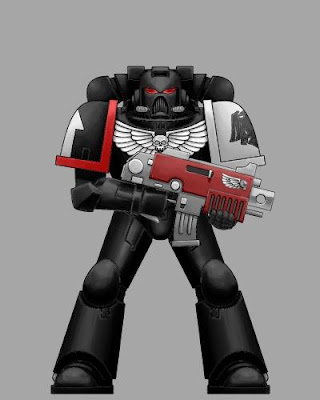 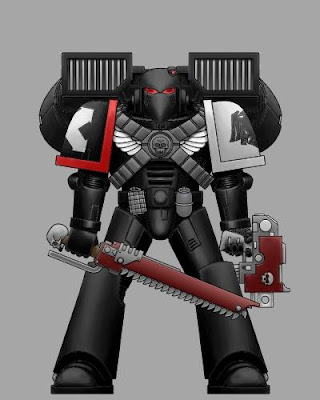 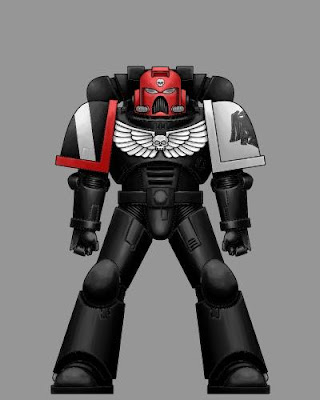 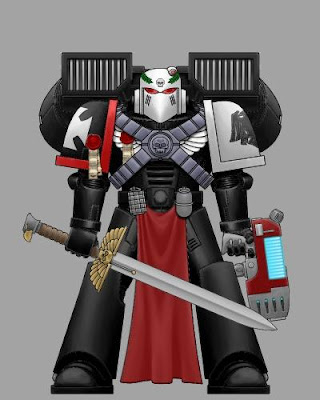 And this is the scheme in a painted miniature: A biker seargeant. 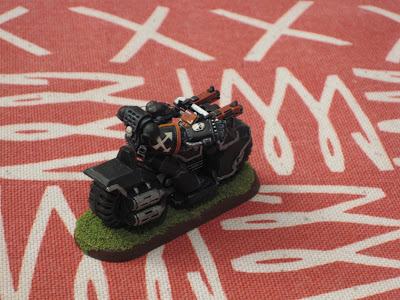 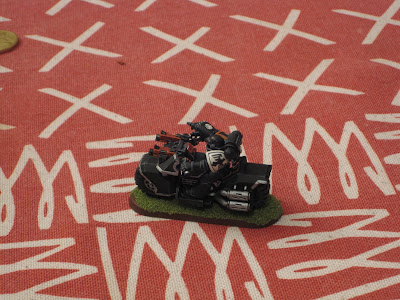 And this is all for this post, don´t mind the tags, we are under construction and I´m testing some things.

And they shall know a beginning.

This is the very first post of the ofwolfandraven blog, written by a pair of spanish gamers who want to share his view of the hobby with every one who want to enter here.

And who, in the name of the god-emperor are you?

True, first of all, a subtle introduction:

Wargamer for over 17 years, painter and part time berserker.

I have been playing Warhammer 40k (with some occasional WHFB skirmishes) since Rogue Trader with a break during the 4th edition.

I've always been a Space wolf player, the very first time I set my eyes on a blister of Grey Hunters it was love at first sight.

Being a Dwarf hater to the bone I still raise a pint of ale to celebrate the anniversary of the destruction of the Squat home worlds. 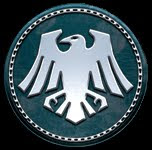 I´ve been a hobbyist and a wargamer for more time than i can remember, but i can try to set a start aproximately at the times of the 2nd edition of Blood Bowl.

Being a great fan of skirmishers, small forces and fast and mobile armies as well as a lover of the fan-unfavourites i can´t do other thing that build a Raven Guard army ]:), that is still growing more than my shelves can afford, with and Eldar and a Tau armies as future projects.

Also a proud -but not a really good- painter i´m always searching the way to paint cohesive uniform-looking armies, and trying to learn something from every miniature i paint.

I´ve been also a very intermitent WFB player ( i hope that in the future my gaming group will turn to play some WFB too), with an special feeling for Wood Elves and the Empire (Raven Guard, Eldar, Empire and Wood elves... Do you see any kind of pattern here?).

So, as you can suppose this will be a blog about Space Wolves and Raven Guard, with some other spin-offs in the form of... almost every other thing GW-related in wich we will try to add our point of view to the yet experienced and ever growing community of wargaming.

Ye all be welcome reading and commenting for here starts Of Wolf and Raven.