I´m not a true fan of the Space Marine Assault squads, I do prefer the sky-falling-itemizable-anihilating-veteran-rocket-propelled-guys ... that are a lot more expensive than the standart rocket-backpack guys but you can tone ´em for whatever you are going to encounter in the battlefield. 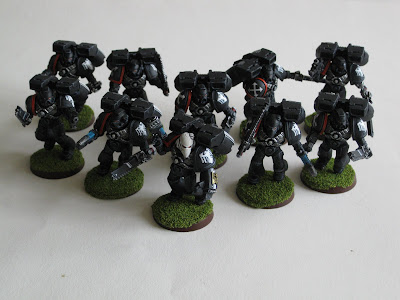 Albeit, I like the standard dudes, they are highly mobile triple-plasma-equipped melee guys wich I tend to not use, but the less expected day at the less expect moment...

I suppose the guys I will field will be a ten-man squad with a pair of plasma pistols and a plasma pistol/power glove sgt. for a total 260 points so this is the way I assembled my guys.

Sarge in the front and the plasma guys as bodyguards. 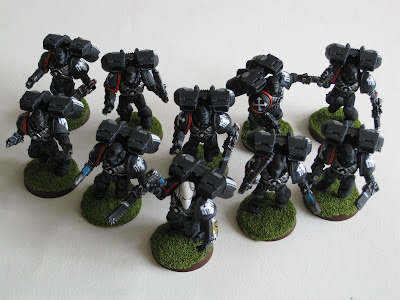 His left side so you can see the markings in the backpack and the swords. 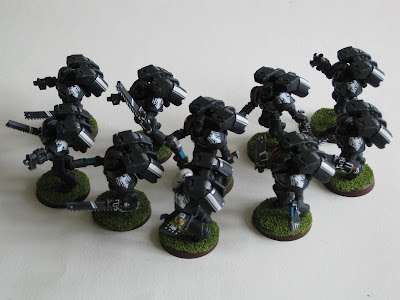 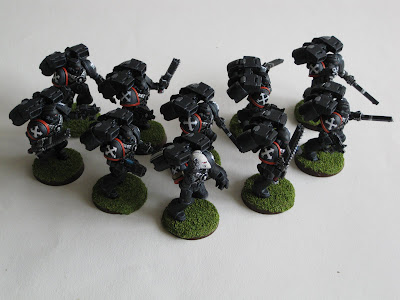 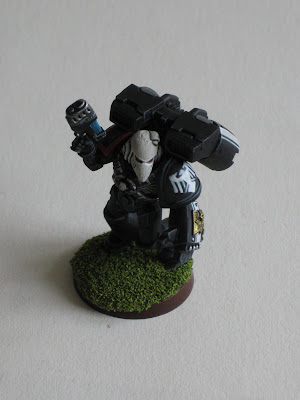 A photo for you to take a look at the sarge´s markings. 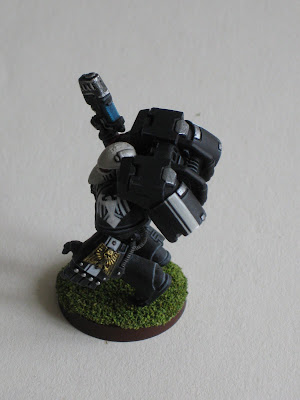 The other side of the sarge. 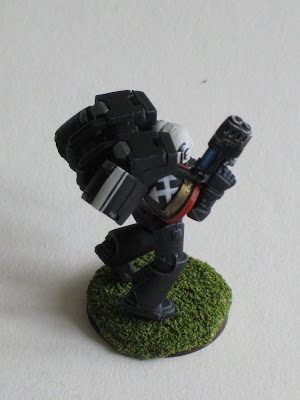 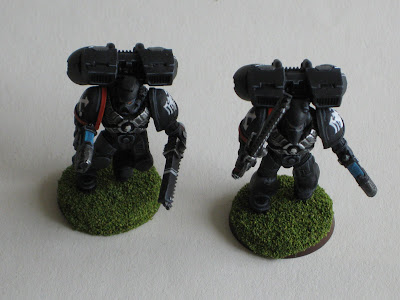 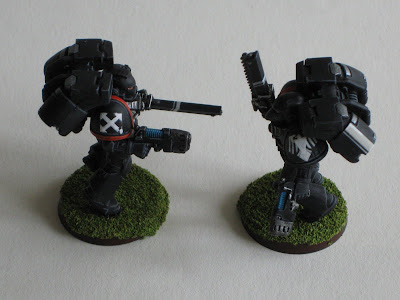 Here is a standard assault trooper so you can see the standard markings. 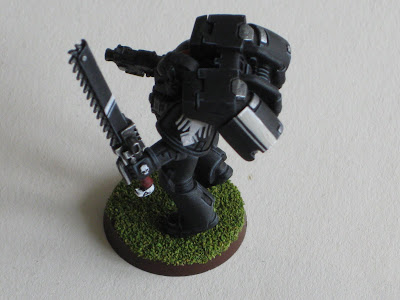 Today is the right time to introduce you to my kamikaze tank popper squad.

They are three XV-8 guys equipped with Fusion blasters and Missile pods so they can pop things near or far from them... They never get bored.

I´ll usually field them with multitracker for everyone and a pair of shield drones stuck to the leader, which eventually will be equipped with a target lock to be able to shoot another unit.

What I expect from them: Tank popping, here, there or wherever tanks are and survive enough to repeat the process as many times as possible and when no tanks left... Heavy infantry... here we come.

The guys, as ever the leader has white plates. 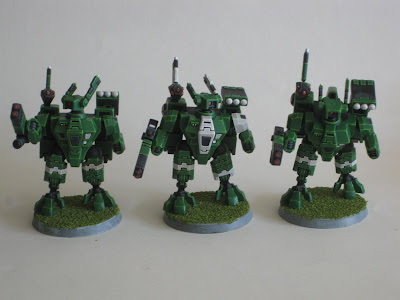 Doing a can-can move to their right so you can see the guys from another perspective. 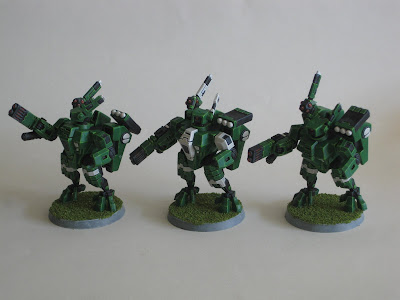 The same from the other side. 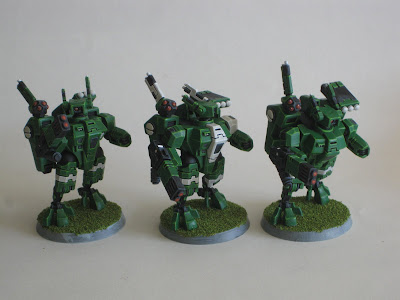 What do you think?

Today a Space Hulk dead marine and a bit of story. 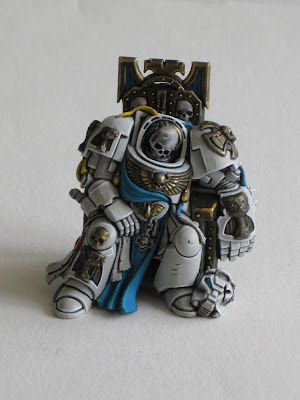 Long time ago, when I was (more) young, my group of friends played a game called "Dark age of camelot", we were all paladins and with a bit of munchkinism we were a very nice group of fanatic almost-unkillable warriors.

We founded a guild called "CUSTOS FIDIS" (guardians of the faith) and out colours were unpainted plate and blueish-white blue cape with a winged cup in the middle.

The thing is that when we were about to play W40K a friend of mine (Firlesnes from Maestros del capitulo told me that he was going to make a revival of our guild in the form of space marines, and I thought that it was a great idea.

We tried white, almost white, more than white, whiteish, not so white and cuasi-white and we weren´t totally happy with the results so now he has Imperial Fists and me... well, Raven Guard,you know. 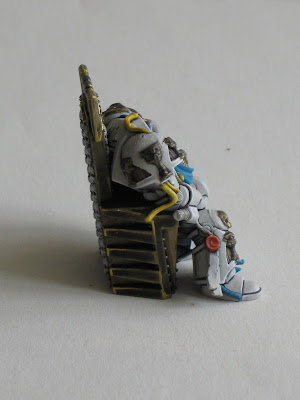 Time passed by and I have improved my painting skills and ordered from a bits page the dead marine of the space hulk tabletop game and I did my try, because our attempt to revive our ancient guild should not be forgotten.

And of course, the mini is full of cups everywhere, which gave me the last push to try it.

And that´s the reason my Raven Guard will fight to recover the dead body and ancient armour of "Lhottar The Redeemer" (the name of my old paladin of the custos fidis guild). 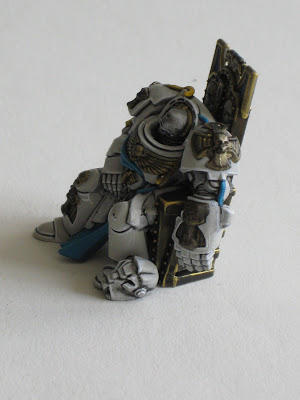 The last thing is... How should I make the base?
I think I will try some kind of ruined building floor, but still I´m not sure.. Any ideas? 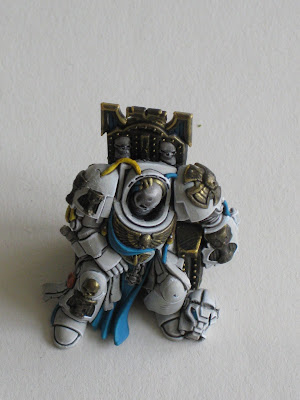 Ahhhh, the Assault on Black Reach Captain, a real delight to paint and look at.

He will be my Shadow Captain Aajz Solari, the captain of the Raven Guard Second Company.

As explained in the codex Captain Solari is leading the efforts of two dozens of chapters against the Leviathan fleet tyranid invasion, what makes him in the guy with more space marines at his command... I suppose.
I will be using him as Sicarius as well as an standard captain with relic blade and sometimes with storm shield as well (nice and unexpensive combo).

He will be leading from the front charging whatever needs to be charged and inspiring anyone whose faith in victory is broken.

At the first moment I was going to convert him, adding some plasma fun, but decided to keep him unconverted (apart from the commander backpack, of course) because I really like this mini as well as my converting skills are not as good as I want them to be :D

This mini was painted about two weeks ago, but it wasn´t until yesterday I put the symbols on his shoulderpads, only to make him more characterful.

And there he is... the Shadow Captain:

I tried to make him a lot more Black/White than the previous paintjob, that had a lot of red everywhere.

I don´t know why I put the red line tatooed in his face, but i like it. 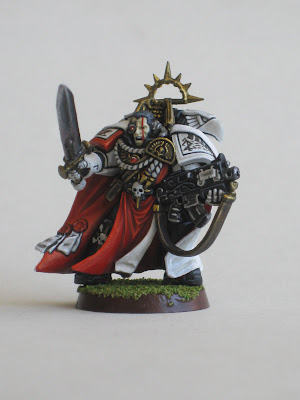 I think his cloak needs some freehand, but I´ll keep it this way until my freehand skills are upgraded... a lot :D 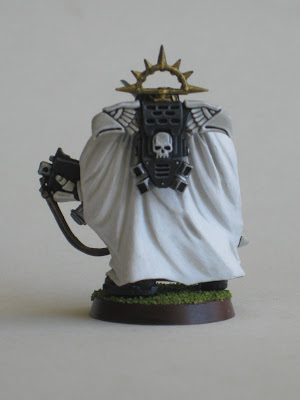 The guy with his Command Squad. 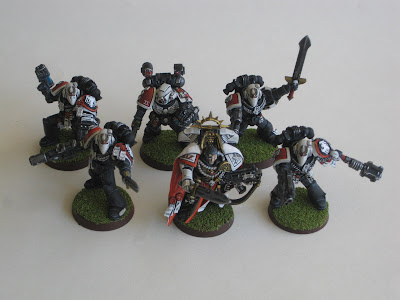 A cenital photo of them. 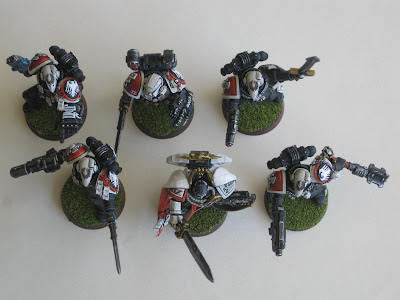 Bonus: I found a photo of the previous paintjob: 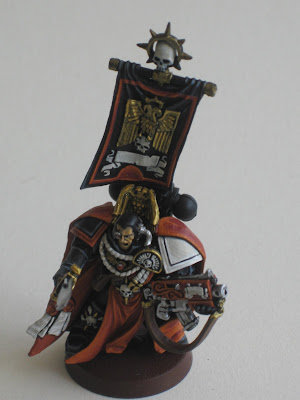