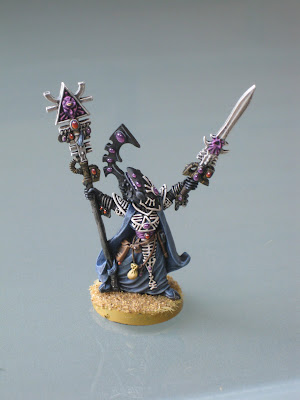 The first among equals, Eldrad is the ultimate farseer, with every option, knowing every power and being able to cast three powers each turn, eldrad becomes a support monster for any eldar army, but this is not all, he can relocate 1d3+1 units at the beginning of the game and his witchblade (that wounds on 2+) ignore armour saves too.

He is totally a monster, not in close combat but fortune/guiding your units as well as dooming enemy´s, which is what farseers are purchased for.

A detail of the helmet and runic armor. 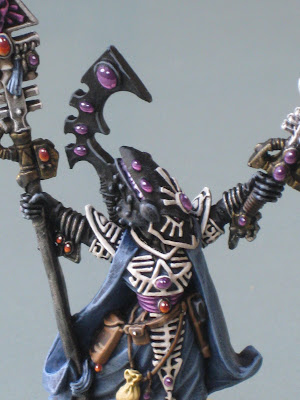 A detail of the helmet and the staff, one of the most iconic eldar equipment ever. 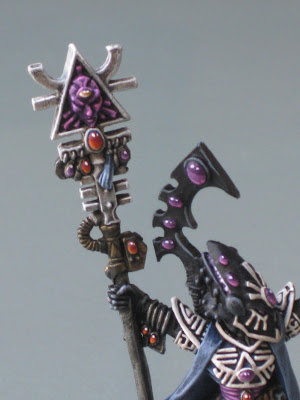 A shot from his back, I still need an avatar to make the classic Avatar/Eldrad combo. 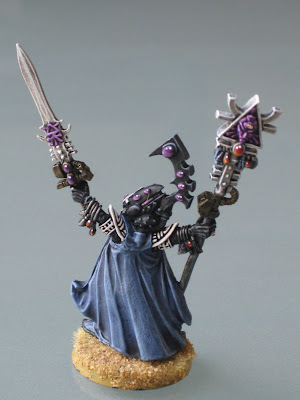 As in the farseer, I´ve tried to create kind of a flowing line of energy in the recess of the helmet, I´m not sure I´ve successed in it, but i still like so much the effect. 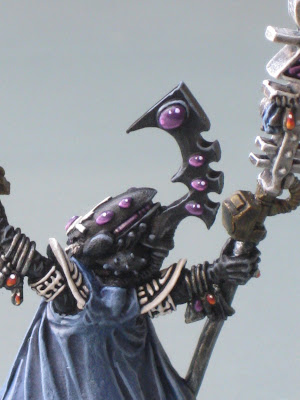 This is a mini I´ve been caring of through the years, I bought it long before it was discontinued and was well kept in my miniatures lot until now, that I can give it a proper paintjob.

Most of 40k gamers of today has never seen this mini before, but well... until some years ago it was the only farseer available apart from Eldrad Ulthran (this and the other without helmet, but I´ve never seen the latter ever). 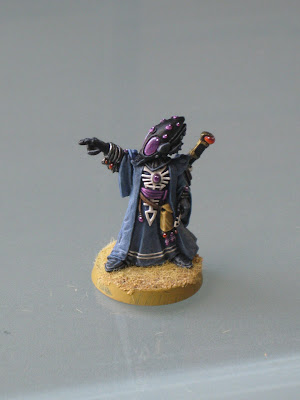 I´ve painted it to fit my warlocks scheme, but the lack of the white faceplate makes it outstand among the warlocks.
This and the huge insectoid eyelenses, that I´ve painted purple as any other eyelenses in my army.

I´ve tried to create a blue flowing energy line effect in the helmet. 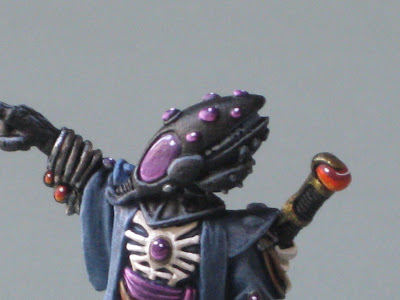 I know his arms are a bit shorter than they should be, but I still love this mini and his organic look, that is a thing that eldar has been missing through the years. 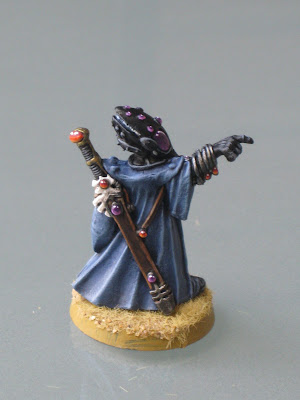 Don´t know why, but in my opinion, this is still a impressive miniature, maybe is the retro look or that it is an eldar miniature which don´t look as the eldar folk of today. 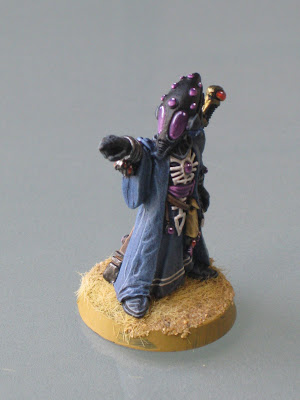 Here is the farseer with his retinue. 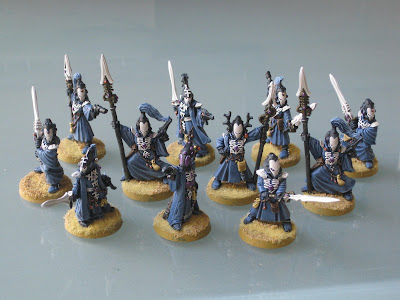 What do you think about it?

Today I´m going to share with you four warlocks, because two of them are the same model of the first batch of warlocks I posted, so I don´t want to make another post of them.

The other warlocks are the one that came in two pieces, which is resting with his sword in his hands and the other is the one that has deer horns in the helmet. 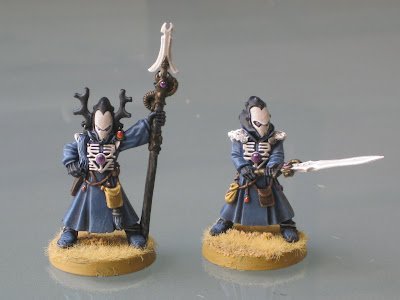 The one with the sword is nice, cause is a new casting which fits the old warlock look, and that gives me the idea that GW still loves the eldar (which once upon a time where the golden army, with more love from GW than the now omnipresent Space Marines), and this is a nice thing to know.

The other mini has a little history upon it, it was inherited by me from a friend, who painted it in a very good biel-tan scheme, but the time and uncaring transportation make a mess of the paint so I stripped the paint and repainted it in my craftworld scheme, but probably it was bought around 1993 so it is not only an old concept but an old miniature too. 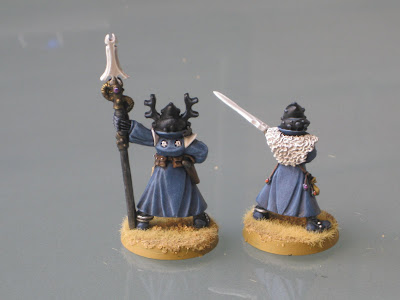 This probably happens with some more of my warlocks, but since they were unpainted I cannot recall what mini was bought when.

I have also painted the last two warlocks, that are the same miniatures as the two depicted in my first post so they will be included here. 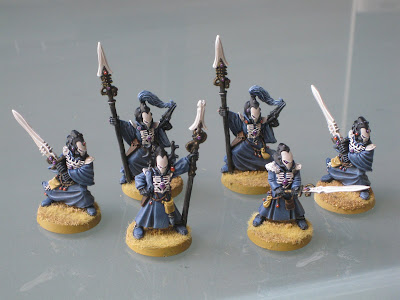 They totally fit one another, Right?

This aren´t really warlocks, they are the farseers released when the 3rd edition eldar codex and the craftworlds expansion came to light. 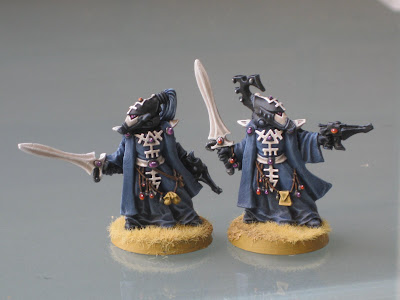 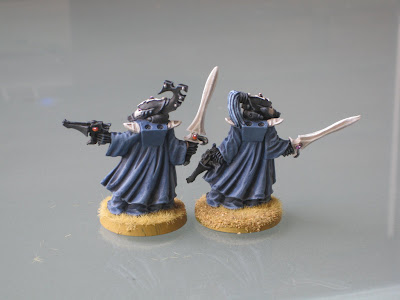 As you can notice, every psyker in my eldar army has a light brown poach, I think this helps to unify the psykers look and to take them a bit apart of the regular troopers of the army.
And gives the look of being standard psyker equipment, maybe a rune poach, or the bag where the soulgems of fallen warriors are stored until the host comes back to the Craftworld. 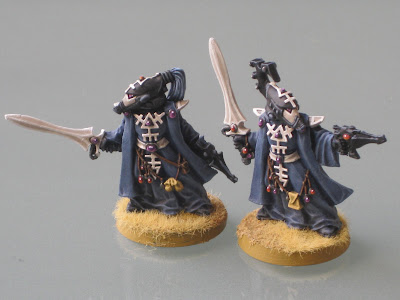 A picture so you can see the faceplates are a bit different from the warlocks´ . 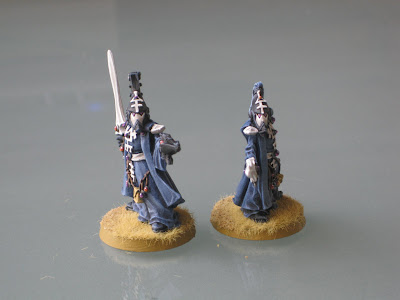 Comments and criticism is ever welcome.

This warlocks were the first of them all, they where among the first released batch of warlocks, they are minis from 1990 so they are very old. 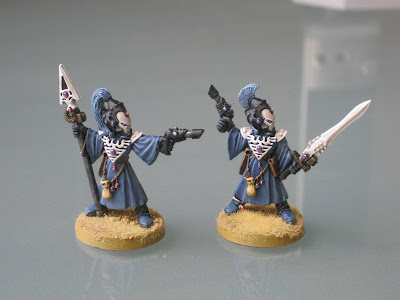 As you can see they aren´t wielding the standard shuriken catapult, they come from a time in which the eldar had access to powerfists and some other weaponery so they are wielding the old laspistol. 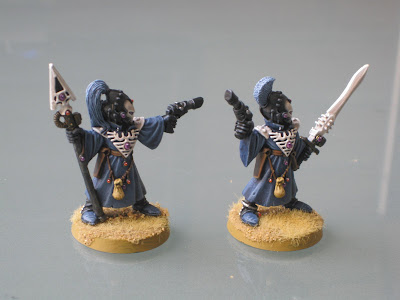 I really like the crests of both of them, just for the flavour it adds to both miniatures. 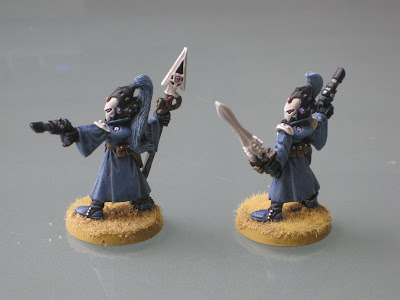 They were painted as the previous warlocks.